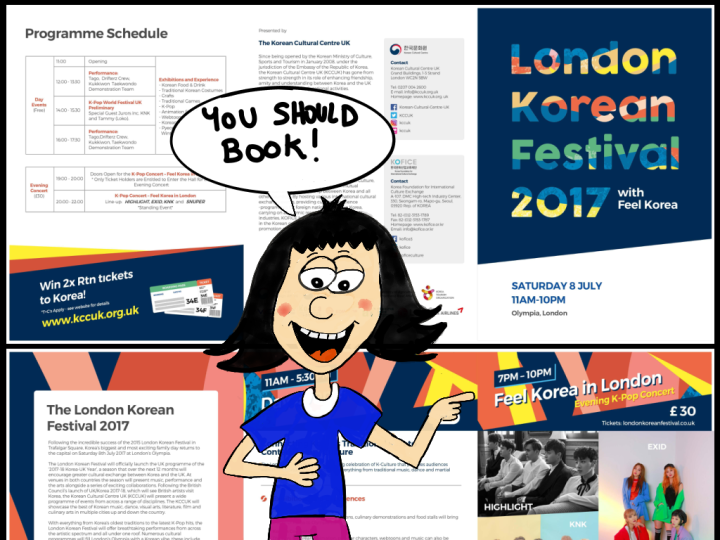 After the success of the London Korean festival in 2015 held in Trafalgar Square, 8th July at London’s Olympia, sees its return. The festival aims to be  just as awesome as the one held two years ago.  The day will be split into two parts. The morning will be free and the evening will be a K-pop concert, ticketed at £30.

Free entry: During the morning to the early evening, the whole family can enjoy:

There is an opportunity for would-be UK K-pop stars to compete in the K-Pop World Festival, with UK Regionals taking place at 2pm during the London Korean Festival. Applications for entry close 18th June, with the UK regional winner going on to the online international audition stage for the opportunity to attend the festival in Korea as representatives of the UK.

The evening  will be a ticketed event starting at 7pm, costing £30 and will feature four K-pop sensations:

To book tickets, click here: or copy and paste this link in the browser. https://www.eventbrite.co.uk/e/london-korean-festival-2017-with-feel-korea-tickets-35043066756

The festival will act as the launch of the UK programmes of the 2017-18 Korea-UK year. Over the next 12 months, there will be a greater cultural exchange between the two nations. At venues in both countries, the season will present music, performance and arts alongside a series of exciting collaborations. These will include a month-long K-Music festival in September, performances from Korean companies on London’s most prestigious dance stages including Sadler’s Wells and The Place, and visual arts exhibitions, workshops and residencies across twenty organisations across London, Bristol, Gateshead, Liverpool and Sheffield. Performance art also plays a significant role throughout the season’s programme, which includes KCCUK-supported external projects and an in-house programme dedicated to the season.