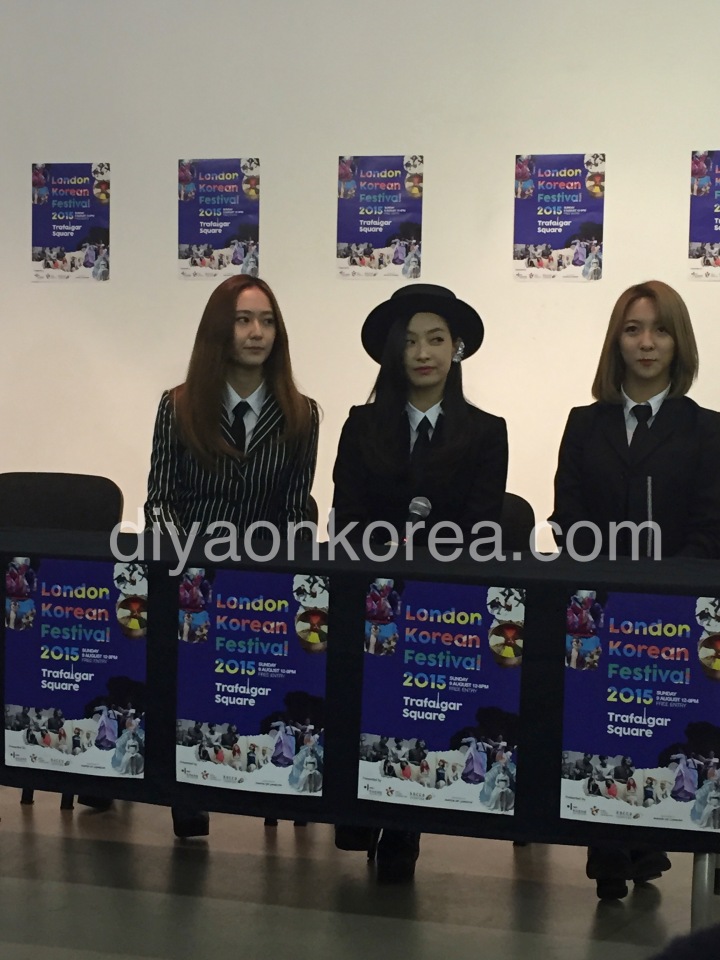 So I attended f(x)’s press conference just before their performance in the evening at the London Korean Festival. I like the occasional K-Pop song, but do not consider myself such a big fan.. but I think that might have changed after seeing them live..

This would have been their first official performance and appearance since Sulli left the band. You can see from the pictures that Amber was not at the press conference, but as you might have seen from the countless photos and videos posted, that she was definitely there at the performance.

The press conference was pretty brief and we were asked to keep our questions limited to the performance and the future. I was not prepared to attend the press conference, so did not come fully equipped, but did manage to snap a few pictures and record a few clips, like the one below.

Although short, I thought this was a cute video. Krystal is caught laughing covering her mouth in a very Korean way! If you wanted to see the full press conference, our good friends over at KoreanClassMassive.com have published the full link which you can view here.

I was feeling a little star struck, being familiar with Krystal from her performance and role in the drama High Kick: Revenge of the short legged. Also the only song up until them that I really knew of theirs and loved (and still love) was Electric Shock

A little blurry, but from this picture you can see they look happy. They were introducing themselves as the band f(x)

Having only arrived the day before from Korea, the girls were looking fresh and seemed in good spirits. Although loosing a band member only a few days before must have been strange to them but they did well to answer the few questions asked. They were slightly stunned when being asked about the rumours of disbanding. Thankfully, Victoria was able to give a coherent answer about the group in the middle of Luna speaking. The translator was also struggling a little bit, and I did wonder if it would have been easier for Krystal to both ask and answer on behalf of the band, as she is fluent in English. Although it was slightly refreshing to hear her take over when re-answering the question about being compared to the Spice Girls and their own characteristics.

You can search the internet for pictures of f(x) at the concert. I was standing too far away for their performance to get a decent shot! I was shocked to learn that during their performance, 40,000 people were at the square. I only believed it when I saw this aerial photo !

Definitely opened my eyes as to how K-pop has been received here in the UK. More on the festival to follow..