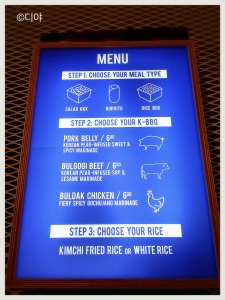 In Shoreditch, there currently sits a boxed metal construction made of stripped and refitted shipping containers housing a host of pop up stores. From a mix of fashion & lifestyle shopping brands, to galleries, cafes and restaurants, you will find it all in this very urban and industrial atmosphere.

It is here that Korrito, the street food fusion of Korean Barbecue and Burrito’s have chosen to open their third location. (The first being Southbank and then Kingston.)

“As an area, Shoreditch is known for being exciting eclectic and a mecca for new trends. We thought our modern take on Korean BBQ would fit right in.”

Joo, the founder of Korrito, is explaining the reason for opening in a new area. This is following my recent visit to Boxpark where I gorged on their mouth watering Korean BBQ.

“We wanted to play off of this industrial vibe, so we created a ‘box within a box’ concept using perforated wire mesh panels, light boxes displaying menus and mini screens showing our Korean Food documentaries”

You are struck by the lights and signs as you enter the 40ft shipping container of Korrito’s unit.

Joo explains that she wanted to capture the many facets of South Korean culture, through the informalness of street food markets, the vibrant neon lights, its technological savvy youth but also highlight the importance of tradition and simplicity. It is a lot to capture and portray in one space, but the architect Samantha Lee, who designed the unit, succeeds in doing just that!

I am reminded of a scene in the film ‘Cloud Atlas’ where the future shows the urban sprawl of this futuristic city called Neo Seoul. I sort of feel like I am in this movie especially as I walk down the corridor, leading up to the Korrito unit, with cool retro paintings hung on the walls.

“What struck me when I first visited Boxpark, much before we had opened, was how communal the drinking and eating areas felt. The units all open up into a courtyard where people can socialise. This is very much in keeping with the South Korean food culture!”

Joo points out to me that I would have noticed the cartographic drawing of Seoul’s landscape etched into perspex and lit up as I entered the Korrito unit. It is a subtle acknowledgement of their origins.

I nodded that I had. I loved the ambience and the custom made red stools and chairs that gently beckoned us, as I wandered in with my friend, to sit inside.

I had eaten at Korrito twice before. Once at the Savouring Korea event, where Joo had launched her three part documentary series and a second time when I had visited Southbank on a Sunday evening. This time it all seemed different. Could it be down to the fact I had decided to stuff my face not with one, or two, but three kinds of meat? Chicken, Pork and Beef!!

This was the very helpful suggestion of Peter, the manager of Korrito, when I had drawn a blank as to what I wanted to order from the menu. I had also chosen this evening to break a three month diet of pure vegetables and fish. What a way to celebrate! All three meats were placed on a tasty bed of kimchi rice and salad as I had gone for the rice box option. We also ate the two side dishes of kim spring rolls and half-moon dumplings along with the little Kimchi pots. The kim spring rolls were crispy seaweed rolls, when dipped in soy sauce, exploded in my mouth in sheer gastronomical delight.

As well as soy sauce pots and kimchi pots, we also had little tubs of Garlic mayo with added kimchi in them! I could have consumed this entirely on its own, it being so tasty. The rice boxes we’re washed down with a bottle of Hite beer and a can of Korean Pear Juice. This had delightful little bits of pear inside and was very refreshing.

So how are they faring in their new digs? Pork belly continues to be the most popular item at this location, yet the Boxpark customers seem to prefer their Korrito in a rice box. Although known for their burritos, Joo is pleasantly surprised by how popular the traditional rice boxes are becoming and explains,

“Being a part of Boxpark in Shoreditch has given us access to a more hip and eclectic group of customers who know and love Korean food. Having Jubo and On the Bab as our fellow Korean friends in the area means we’re building a strong following for Korean food in Shoreditch”

I certainly know my thoughts on the venue and the food, but what do others think?

“I tried the Korrito at Shoreditch Boxpark in July.” Says Londoner and Foodie, Ali Ghezelbash, “I hadn’t had Korean food before so this was an exciting opportunity to try some new flavours. The simplicity of the menu, as well as the ability to sample some of the meat before deciding was very cool. The food was a great introduction to Korean cuisine! The venue and staff were also very welcoming. All in all, thumbs up”

There are a lot of new exciting things around the corner for Korrito. They are planning to introduce ‘Dukbokki’ to their side dish line up and already my mouth is drooling. It is a typical snack food that you can eat from most street vendors in Korea made of soft rice cake and fish cake with chilli sauce. This is the perfect dish for Korrito, but you just know they are going to add their own unique twist to it.

Korrito have also been working on their own online delivery platform on a new website they are building. They have piloted lunch time deliveries for Joo’s old colleagues in the city and it has really gone down well.The demand of Korean BBQ is spreading.

Furthermore, they are also trialling out a new venture called Happiour! Throughout the next two months Korrito will be offering discounts and deals through this new and exciting app, Happiour. This is downloadable through the Apple app store and has been inspired by the idea of making the traditional Happy Hour concept into a digital and shared experience. It highlights exclusive offers and events that you will want to know about in top bars, cafe’s and restaurants around London and it does all this in real time. It allows you to share this with your friends too!

“As a relatively new business, Korrito loves partnering with other like-minded companies so we are really excited to be working with Happiour.”

Download the app and throughout October and November on various days, expect to hear about free sides with your meal as well as and two for the price of one options. It is already on my phone and I am patiently tapping my fingers together in eager anticipation.

Thank you to Joo, Peter and the team at Korrito for a truly delightful experience at Boxpark.

One thought on “Do you like it hot at Korrito Boxpark?”