“A month had already passed since Bugeye and his mother moved to Flower Island. She had tried to console Bugeye at first by saying that people lived there just like anywhere else, but he knew it was a garbage dump filled with things used up and tossed aside, things people had grown tired of using, and things that the people who lived there were likewise discards and outcasts driven from the city.” — Excerpt from Familiar Things by Hwang Sok-yong, translated by Sora Kim-Russell, Scribe Publications, June 2017, p.36.

On Thursday August 17, Asia House will be joined by one of Korea’s most renowned authors, Hwang Sok-yong, for a talk on his recently published novel, Familiar Things, which was translated into English by Sora Kim-Russell.

Familiar Things is based on the life of 14-year-old Bugeye and his mother who arrive in a vast landfill site known by few and called Flower Island, following his father’s internment in a government ‘re-education camp’.

Inhabited by those driven from the city by poverty, life on Flower Island – located on the outskirts of Seoul – is hard and sobering for Bugeye and his mother. They live in a shack and support themselves by picking recyclables out of the refuse. They hardly have enough to eat and lack many of the sanitary conditions we take for granted on a daily basis.

One day Bugeye’s friend Baldspot, a little boy living with his alcoholic and gambling father, secretly tells him about the mysterious blue lights he sees around the landfill. Reluctant to believe it at first, Bugeye also begins to see the same peculiar lights and the ancient spirits that still inhabit the island’s landscape reveal themselves to him. His luck begins to change when they point him in the direction of a bundle of cash and a handful of gold jewellery buried under a mound of garbage. 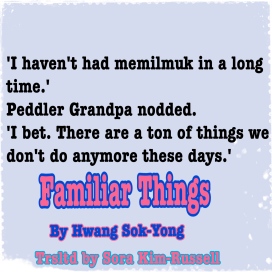 Laced with cultural and environmental references and descriptive narratives of poverty and hunger, Familiar Things is set in the 1980s and depicts a society on the edge of dizzying economic and social change. It is a haunting reminder to all of us that we should be mindful of how much we pollute our planet and what we discard.

The talk will be in Korean and interpreted into English. A book signing and drinks reception ending no later than 21.00 will follow.

Born in 1943, Hwang Sok-yong was sentenced to seven years in prison in 1993 for an unauthorised trip to the North to promote exchange between artists in North and South Korea. Five years later, he was released on a special pardon by the new president, Kim Dae-jung. The recipient of Korea’s highest literary prizes and shortlisted for the Prix Femina Etranger, his novels and short stories are published in North and South Korea, Japan, China, France, Germany and the United States. Some of his previous novels are; The Guest (2006), The Ancient Garden (2009), The Shadow of Arms (2014) and Princess Bari (2015).

To book tickets for this event please click here.

Asia House Arts Members need to enter their unique membership number when booking online. This can be found on the back of your membership card. Please call 0207 307 5454 if you experience any issues booking tickets.

Hwang Sok-Young is also appearing on the 16th August at the Edinburgh Book Festival. For more details, check it out here.